Learning the guitar notes on the fingerboard is a great goal to have for any guitarist.

Whether you are a beginner just starting out, or you’ve been playing for years, learning your guitar notes is immensely valuable.

For a beginner with little knowledge of the instrument, this can be a daunting task.

But you don’t have to be intimidated by the fingerboard. It is learnable and you can do this!

Preparing To Learn The Guitar Notes

Rather than trying to learn the entire fingerboard at one time, you will do better to break it into smaller sections (positions).

You’ll learn the note name, fret position on each string, which finger to use, and what the note looks like written on the staff.

This guide does contain some images of the staff to help you along. The staff is a great visual tool that can help you learn many concepts in music.

If you need an introduction to the staff check out How to Read Music Made Easy.

Feel free to bookmark this page for your own reference. Let’s get it started! Before reading further, take a minute to review the following diagrams. 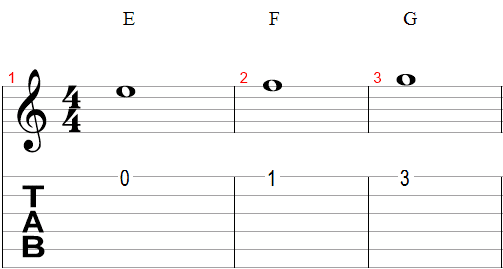 Let’s begin with the first string, the high E. When the string is sounded open (no notes fretted) the note is E. When fretting with finger #1 at the first fret you have F.

Now fretting finger #3 at the third fret gives you G.

So the notes on the first string in the first position are E, F, and G. Try practicing with the sample pieces below.

Helpful Tip: A productive practice time is essential to your success. Check out these 5 Ways To Make Your Guitar Practice More Productive.

Guitar Notes On The Second String (B) 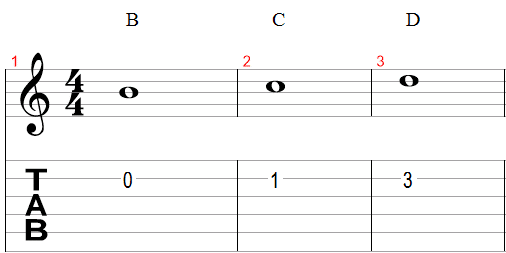 The second string is the B string. That means when it is played open or not fretted the note is B.

With finger #1 at the first fret on the B string you have note C. Third finger at the third fret is D.

So the notes on the second string are B (open string), C (fret 1), and D (fret 3). Practice the sample studies below. 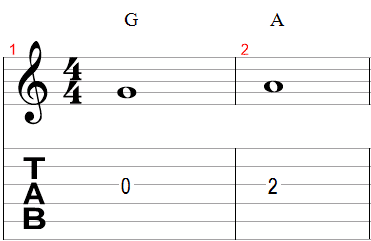 When the third string is played open it produces G. Fretting finger #2 at the second fret gives you A. Use finger #4 at the fourth fret to get B.

So the notes on the third string would be G (open), A (second fret), and B (fourth fret). Practice the sample studies below.

(Note: After learning the first position notes check out easy guitar chords and get started learning some chords.)

So the notes on the fourth string are D (open), E (second fret), and F (third fret). Practice the sample studies below.

The Fifth String (A) 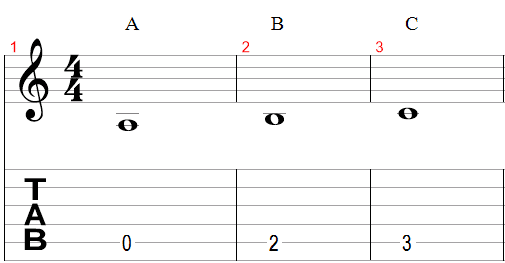 The fifth string played open is A. Fretting finger #2 at the second fret is the B note. Finger #3 at the third fret is C.

So the notes on the fifth string are A (open), B (second fret), and C (third fret). Practice the sample studies below.

(For more tips on memorizing the notes check out this article at guitarlessons.com) 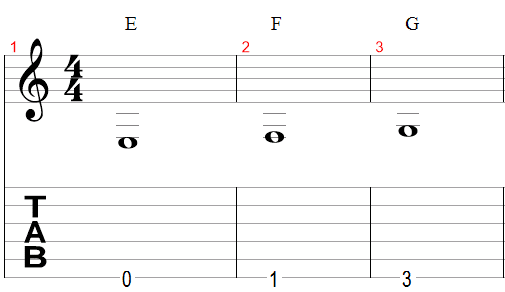 Finger #3 at the third fret gives you a G note. So the notes on the sixth string are E (open), F (first fret), and G (third fret). Practice the sample studies below.

The first position notes are a great place to start when learning the notes on the guitar fingerboard. To learn the notes thoroughly, you should practice as often as possible.

It is best to see the notes written and then see the notes on the fingerboard. Try playing some of the sample pieces below every day to help instill the notes in your memory.

Now that you know some notes on your guitar, consider learning more about your instrument like how to change guitar strings!

Take the next step in your guitar journey and learn the major scale on guitar!