Easy Guitar Chords For Beginners – 12 Chords You Need To Know

Have you been wondering which easy guitar chords you should learn first? For a beginner, it can be difficult knowing what to learn and what to focus on.

Take a breath and relax, you have come to the right place.

This guide has got you covered with the twelve chords you should learn first. These are the most used chords for guitarists in their most basic fingerings to get you started.

With these twelve chords, you will be able to play countless songs.

Learning basic chords is the most beneficial thing a beginner can do. After you are familiar with the fingerings of each chord you should learn as many songs as possible.

Pick songs that contain the chords on this list.

Practice strumming and changing chords with a metronome at first. Afterward, you can increase the tempo.

The following chords can be found in any chord book on the market.

Helpful note: Learning the guitar string names can be very helpful in mapping out the fretboard and finding chords. Now let’s get started with the chords.

Getting Started With Finger Numbers

Before we begin with the chords lets talk about reading the chord charts.

The left-hand fingers are numbered 1-4 starting with the index finger (#1) to the pinky finger (#4).

Some advanced players use the thumb quite often. For now, it should stay positioned behind the neck.

Do not wrap the thumb around the top of the neck while playing. Try to keep the left-hand thumb in line with the middle finger.

This will promote a good technique.

Now let’s apply the knowledge we learned about left-hand fingers to a chord diagram. 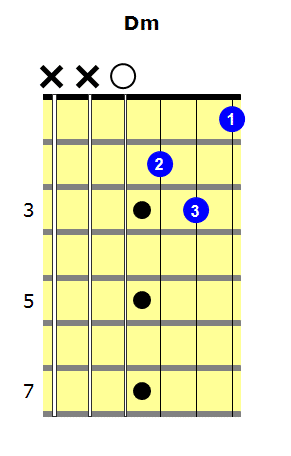 The horizontal lines on the chart represent the frets on the neck of the guitar. The blue dots show you which frets and strings to place your fingers on.

The numbers on those blue dots tell you which left-hand fingers to use when fretting the notes.

Fret numbers are indicated at the left of the chart.

G major is one part of what I call the big three. The big three is made up of G, C, and D major. These three chords are the most played among guitarists by far.

G, C, and D are easy keys for the guitarist to think and play in because there are very few sharps or flats. A good song in the key of G is “Wish You Were Here” by Pink Floyd. 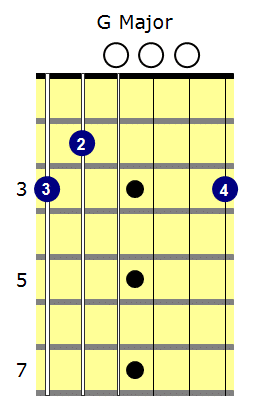 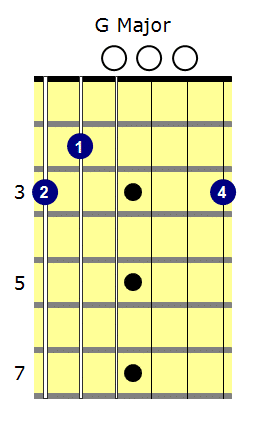 A member of the big three for sure, and possibly the daddy of them all. No kidding, I play this chord every time I pick up the guitar.

I will tell you that C is one of the most important chords in all of Music Theory. Not just for guitarists but for all musicians.

There are no sharps or flats in the key of C. This makes it easier to build with from a music theory standpoint. Much of music theory begins with C.

The last member of the big three. It’s a little uncomfortable at first but doesn’t take long to get the hang of.

D is so common among guitarists it is worth getting very good at making this chord. D major is the third most popular key used in all songs on Spotify.

You will be playing this chord as long as you are still playing the guitar! There are many pop songs in the key of D so get used to it now.

D is also a very popular key for hard rock and blues music. “Under the Bridge” by the Red Hot Chili Peppers is in D.

E major is very common in Pop music and some country music. The chord really shines in Blues and rock music.

It’s as if the E major chord is oozing testosterone, a key ingredient for rock and roll.

Get used to the shape of this chord as it will appear over and over again. The shape is the same as another chord on this list called A minor.

Some songs in E include “Black or White” by Michael Jackson and “Candle in the Wind” by Elton John.

This one is popular in Country and Pop music as well. Eric Clapton and Adele both like to create music in this key. It presents a somewhat optimistic mood.

A major can be a little bit challenging for those with large fingers. You are trying to fit in three fingers within the width of one fret.

You will play it often because it is a primary chord in the key of E major.

After learning this one it is easy to learn A minor and A7.

B major is usually a little difficult for beginners. It is a good idea to get really good at playing A first. This way you will already be familiar with the main shape of the chord and you can add in finger 1.

B is a great chord for a guitarist to have in his/her arsenal. The key of B is associated with negative emotions such as anger and jealousy.

F is probably the most difficult to learn on this list for a beginner. It is challenging because it requires a little more strength in the hands and fingers.

Don’t be discouraged, if you stay at it and practice every day you will get it.

Before you know it you will be playing Learning To Fly by Tom Petty.

The mood of the F chord can be interpreted in different ways. Many find it to be overly optimistic-sounding.

Still, others find the sound somewhat complacent and able to bend to whatever mood you would like it to be.

F major must have the notes: F, A, and C

Minor chords have an unresolved or dissonant character. They help to create tension.

This is a great chord to learn not only because it is used frequently, but also its “shape” is very useful. This shape can be moved up and down the neck to play in different keys.

Example: If you know B minor then you already know the shape for C minor and B Flat minor.

This chord takes some practice to play it well but it’s well worth it. “Hotel California” by the Eagles says all you need to know about the key of B minor.

The chord/key produces a very melancholy mood and/or sense of an unavoidable tragedy.

The key was very popular with classical composers such as J.S. Bach (The Art of the Fugue), Mozart (Requiem).

This chord is fun. It’s easy to play, has an excellent familiar sound, and it’s used very often.

The chord is very popular among classical guitar composers. The reason for this is two-fold at least.

First off, it produces a “moody” sound that suits the attitude and natural tone of an acoustic guitar.

Secondly, most of the strings in the E minor chord are left open (not fretted).

With the guitar, anytime you can get the desired result by using fewer fingers its generally a good thing.

Heavy metal guitarists like to write in Em too, probably for all the same reasons mentioned above.

Think “House of the Rising Sun”. Am is one of my favorite sounding chords.

It’s dissonant and brings to mind “classical guitar” as soon as you hear it. Its relative minor relationship with C major ensures that it will be used always and forever.

In fact, if you want to make a piece that is written in C major easier on the guitar player then transpose to A minor. The key of Am requires the fingers to stretch less and also enables fewer fingers to be used than C major.

Many of the first songs you play in minor keys will be in E minor or A minor. A minor is the relative minor of C major which means you will play it a lot.

You’ll notice that A minor and E major have the same basic shape.

Its sound is somehow uplifting and unresolved simultaneously. It’s a quality that makes it very important for blues music.

That same quality also makes D7 right at home in country music and softer rock music. To get the feeling of how D7 is used in blues music check out BB Kings “Why I Sing the Blues”.

The classic Christmas songs “Deck the Halls” and “We Wish You a Merry Christmas” also feature the chord.

Now that you know the most common chords, repetition is key! Strum simple rhythms like the ones below while switching chords.

Start slowly and focus on making the chord produce a full and clear sound.

Make sure that you are listening for any muted strings and then adjust your fingers accordingly.

Next, focus on playing the chords in rhythm with a metronome.

Finally, practice switching from one chord to another.

Practice the strum patterns below. After you get comfortable with them start substituting in the other chords.

If you are serious about becoming a better guitar player check out my article 5 Ways to Make Your Guitar Practice More Productive.

And remember to always check with myonlineguitartutor.com for your guitar resources.

And those are the twelve chords you will play most. If you would like to have more basic chords in a book format I recommend Mel Bays Guitar Chords.

This is a tried and true classic that won’t let you down. It is the best selling chord book ever published.

Feel free to bookmark this page for future reference. Leave comments below, we would love to hear from you! If you found this article useful please share it!

And don’t forget to check out my next article How to Change Guitar Strings – The Only Guide You Need.